It was another dull quarantine day until I sipped my glass of lemonade. April sun streamed through it and cast a bright pattern across the desk. Lounging about the house I saw these reflected and refracted mosaics everywhere: a basin; a bowl; a mug and remembered that similar shimmerings are seen at pools too. My loafing offered a question: How could you make a surface which would throw out a particular light pattern when it was lit from a certain angle? 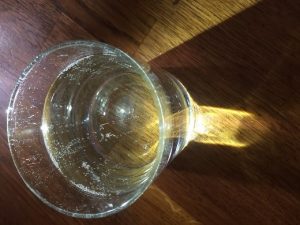 In 2013 Swiss scientists found a way to answer this question with astounding complexity. They showed you could form any shape possible by lighting up the right surface. And I mean any shape not just a square or circle. A photograph of the scientific revolutionary Alan Turing was projected onto a wall just by shining a torch onto a piece of specially designed perspex. The transparent tile had nothing embedded in it. All that was needed to summon Dr Turing were the almost imperceptible but precisely placed curves on the surface.

These patchworks of focal intensity and shade, seen everywhere, that were mysteriously woven into Turing are called ‘caustics’ (from the Greek meaning burnt). They are conjured from the reflection or refraction of light by curved surfaces like the ripples on water, the inside of a cup or a raindrop. The Swiss scientists’ secret was to mould their acrylic sheet to harness these refractions and turn them into Turing.

Since then others have leapt at the idea. Architects plan to beam solar murals from windows while scientists in 2018 found the technology had a use in the fight against bank note forgery. With criminals aping ever more complex security marks on legal tender they suggested embedding microlenses in notes which, under a torch like the one on your smartphone, would project a caustic image and conveniently prove authenticity – or otherwise. Headlights which shine with a less blinding intensity have also been proposed along with much better shapes for solar cells.

But how do these inventors match surfaces to the patterns they want? Complex algorithms, called optimization algorithms, begin the process by suggesting what surface might work to project Turing’s head. They calculate how light will come out of the other side of this surface to produce an image by modelling the way the light refracts through it. The computer simulation of the surface is then altered until the image it puts out is a more or less perfect match for the one they are aiming at, in this case Turing’s head.

Historically the study of caustics evolved from the reverse of my musing on my lemonade. Instead of trying to find what surface they needed to get a particular caustic pattern, scientists were looking at the patterns that came from a given surface. In the 1970s this examination of a pretty but not very useful pocket of maths suddenly moved into the, then, very modish catastrophe theory, a cousin of the more famous chaos theory. As usual, it was Leonardo da Vinci who started the business in 1508 using ray diagrams to model the paths of light and resulting caustics though he didn’t call them that. With computers and more advanced mathematical tools this ‘ray tracing’ technique has been refined along with other methods that have helped to create realistic computer graphics.

These are modern triumphs and while admiring them we can turn from the black board to rainbows, oceans and artists who have long seen the light, from da Vinci in the 16th Century to David Hockney’s pool paintings in the 20th. Now we may find that lockdown days can still hold zest and beauty – only in subtler forms that guide us towards da Vinci’s teaching: “To develop a complete mind: Study the science of art and the art of science. Learn how to see and realise that everything connects to everything else.”