A pair of acrobats crouch on stacked wooden blocks, wobbling precariously to a loud tock-tocking. Instructions are shouted in Arabic from overhead, “Tie up your hair!”, “stand up straight,”, “why are you wearing a mini skirt?” B-Orders, a piece of physical theatre, performed by the Palestinian Ashtar Muallem and Fadi Zmorrod is going to be an anxious yet captivating and enlightening hour.

The mood created in the first minute of the show could not be further removed from what we associate with circus tents, vertical poles and ribbon acrobatics. And from the acrobats’ jeans-and-jacket look and child-like toying with the Jenga bricks, you almost settle into the assumption that the equipment is set up for the next show. But lo and behold, brick-stacking evolves into contortionate acrobatics, and soon into gravity-defying choreography, incorporating the ‘big kit’ into their dance as if taking flight.

This isn’t to say that the vertical acrobatics are any more emphasised than the floor work. The acrobats stacked and rearranged bricks evoking symbols and emotions that could not be expressed with only their bodies. For instance, Muallem flirtatiously lays out a stepping stone bridge between her and her male counterpart, representing daring at her coming of age. But later the same bricks are used to encircle her, in punishment for her precociousness. In submission, the acrobat-acting-adolescent folds into an upturned balance on her lower arms, her legs frozen in a running stance. Zmorrod places the bricks tentatively on each cantilevered foot, her crotch, and the small of her neck, and a sudden jerk of rebellion casts them to the feet of the audience. At this climactic moment, we can’t but sympathise with the frustration which fuels this metaphorical unshackling.

Of the little speech during B-Orders, only a fraction is delivered by the acrobats themselves. We are informed of traumatising childhood memories by means of the refrain, “I remember”, paired with suitable bodily contortions on stage and aggressive mechanical sound effects. Later, traditional Palestinian music with tambourine and wind instruments accompanies the girl’s monologue lamenting social obligations, such as having to cover herself at fourteen, and, inevitably, marriage at twenty one. The lack of visuals and attention-grabbing lighting encourages us not to be distracted from the expression of the acrobats.

B-orders is no conventional circus spectaculaire, no elephants pirouetting on their trunks. Rather it is a low-cost, two person cast production which forces you to share some oppressive moments in just one episode in Palestine’s troubled story. But there is a cathartic pleasure in their anti-gravitational delivery. One acrobat runs up a vertical pole as if it were a ladder, and another tumbles ground ward, tangled in the suspended ribbon, only to stop, as if electrocuted, less than a metre from the floor. These gasps and sighs of tension come as a breath of fresh, thought-provoking air amidst an Edinburgh full of frivolous, easy-listening comedy. 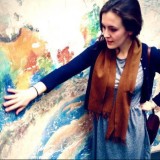 Sasha writes for culture, and is Arts editor for the Fringe edition 2015.