How did it feel when you first were elected, how did it feel in the immediate aftermath and how do you feel now a couple of weeks later?

The immediate reaction was just shock! I was actually shaking from head to toe, I have never had a feeling like that. A lot of work went into it. I would have felt […] that I’d not been able to deliver on what [people] helped me with.

I was so grateful to everyone that did vote for me and everyone who shoehorned. I think that, at the end of the day, the major barrier is getting people to vote. I mean, the fact that only just about 10 per cent of the student population actually vote – it’s actually unbelievable!

How was it with the other candidates for the Sabb positions?

Steph and I obviously get on. We get on really well and we knew each other from before at the Sports’ Union. I think it was sort of like a consensus of “we’re all in this together, we’re all trying to do this”.

I did bump into my opponent, Declan […] when we bumped into each other one of us would just go off into another place. I mean we’re not gonna both try and fight it out in the area, we did have mutual respect for one another, which was good!

What is the top priority from your manifesto?

Again, the #TakeTen campaign was another really fun one, kind of like “take that 10 minutes, so that’s more creative, using social media. It’s just about trying to get people more active.

My final one would be making sure school societies get more support, and push so that every school has a society. The reason I ran for it is just trying to get people involvd in university.

Is there anything about the Edinburgh University Students’ Association that could be improved?

I know the room bookings was a massive issue. Why is this such an issue? This is a huge university, there’s so many rooms.

The Students’ Association as a whole, I think it just needs to be more interactive with the students. So, just trying to get out there. And then hopefully get more interest, get out there, don’t sit in the office all day, like actually go and engage, go and talk to these people, go talk to the students, get involved,

You’re trying to get votes over someone else, what I did was basically try to run my own race, […] they are long days, but you can kind of call it a day when you want,

Would you advise people to run for it?

I would certainly say it takes someone who is completely dedicated. You can’t be kind of complacent or lazy. 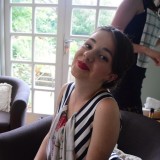