Never work with children or animals – so goes the old adage, which writer and director Debbie Isitt magnificently upended with the supremely popular Nativity! For those unfamiliar with the film, Nativity! is a warm-hearted tale about a teacher whose fib gets rapidly out of hand to hilarious consequences. All the while, his primary-school class are under pressure to create a show at Christmas amid the rumours of Hollywood interest. If ever there was a perfect choice for theatre adaptation – it is this story. There can be no denying that Nativity! is cheesy, feel-good fun. It’s precisely what the doctor ordered.

There is a tendency for over-reliance when producing a live show based on a successful film franchise, but Debbie Isitt’s Nativity! navigates this perfectly. Significantly elevating the musical performances whilst keeping most elements the same, means much of what made the film so enjoyable remains.

A big part of the show’s charm is the character of teaching assistant Mr Poppy, played brilliantly by Simon Lipkin, embodying the childish joie de vivre many of us have at Christmas time.

One of the many joys of this production is the incredibly talented child stars. In no means lesser in performance and energy than their adult counterparts, many of the most touching moments are delivered by kids.

One particular instance highlighting the professionalism and talent of the child actors on stage is Kheiri Isaac-Osmani in his role as TJ. Cast as the angel Gabriel in the nativity play, during one number he descends from the heavens with aplomb and much applause, with enough swag and charisma to bring the house down.

The show dazzles, with a canopy of twinkling stars and the stage littered with immaculate presents – out of which many characters come tumbling throughout the show. The versatility of the set pieces ease scene transitions and leave the audience wondering who will be next out of the box. These bright, bold colours from David Woodhead’s set design are seamlessly reflected in the similarly intricate and vibrant costumes. Here Woodhead has really outdone himself, in the parade of sequinned-surprises the nativity montage brings, an extravaganza of quick-change wonder.

For this reviewer, the one element which threatened to let the show down was Jo Brand in the part of the critic, being crow-barred into scenes and numbers which were much better off without her. A very funny woman, her snarky asides were welcome and hilarious – her singing and dancing were not.

Despite this, the entire production exudes confidence. From the youngest to eldest performer there is a strength to its light-hearted whimsy, which combined with the festive fervour, makes it an unstoppable show, perfect for all the family.

Nativity! The Musical is a shining star of a production. A stupendous mix of charm, talent and Christmas spirit.

Image: The Other Richard, Capital Theatres 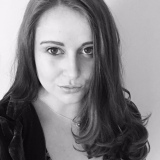