Edinburgh-based poet Rachel Plummer’s new book, Wain, is a children’s collection based on Scottish mythology, reimagined with an LGBTQ+ focus. It contains poignant poems by Plummer and stunning illustrations by Helene Boppert, using metaphors of selkies, fin-folk and goddesses to represent LGBTQ+ identities.

The poems in Wain are smart, magical, and sensitive. A particularly memorable poem imagines the Loch Ness Monster as non-binary: ‘You don’t need to believe in Nessie/ But that doesn’t change who Nessie is.’

These fictionalised manifestations of LGBTQ+ identities are an ingenious and warm way of writing queer narratives into stories already ingrained in Scottish culture and history. They make underrepresented identities easy for children to understand and, perhaps, identity with themselves.

In February, Plummer learned that a headmaster had refused to use one of her poems in a lesson on diversity in his school because he felt it was ‘inappropriate.’

In May 1988, Margaret Thatcher’s government enacted the Local Government Act. This included a clause – Section 28 – which prohibited ‘intentionally promot[ing] homosexuality or publish[ing] material with the intention of promoting homosexuality” and “promot[ing] the teaching in any maintained school of the acceptability of homosexuality as a pretended family relationship.”
Although this law was repealed in 2000 in Scotland, the legacy of its blatant homophobia is still being propped up by institutions, threatening children’s access to a diverse and inclusive education. A headmaster’s refusal in 2019 to allow a children’s poem into his classrooms cannot be treated as one individual’s exceptional prejudice. It is an indicator of the state-approved othering and sexualisation of LGBTQ+ people in the 1980s that found its way into education, and has stuck there.

Images of heterosexuality are unavoidable for most children from the moment they are born, and the appropriateness of this has never been questioned. Claiming that LGBTQ+ relationships and identities are, on the other hand, beyond the realms of children’s understanding implies that they will not meet and know LGBTQ+ people outside the classroom, as if LGBTQ+ people only exist in the abstract. Treating it as something to be taught or not taught, rather than a significant percentage of the population. LGBTQ+ people will most likely already be a familiar part of any child’s life, as their friends, their family, or perhaps, themselves. Ignoring that, as too many people do, creates more confusion, not less.

Ideally, children should learn about LGBTQ+ relationships and identities in the same way they learn about straight relationships: as a given. However, we currently live in a heteronormative, cis-normative, society. The representations of relationships children see in popular culture are most often straight, and parents cannot always be relied upon to explain that this is not how everyone loves, not what every family looks like.

Schools have a duty to undo the work of this often inevitably heteronormative upbringing, to give children, who might be LGBTQ+ themselves, the language with which to talk about it, and the tools with which to dismantle shame or hatred when they encounter it.

You can order a copy of Wain, or donate a copy to a school, through the Emma Press website, linked below: 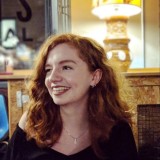